Here are the lists of Roblox Arsenal Codes that can be used for some rewards. We are going to list all active Codes for Arsenal that contain some in-game rewards such as voices, bucks, and new skins. In addition, you can use these codes to upgrade your characters so you can have fun and enjoy the game.

What is Roblox Arsenal Game?

Arsenal is an early shooting game (FPS) on the famous Roblox game forum. The game, created in 2015 by the ROLVe Community group, has steadily grown in popularity on Roblox, with over one billion visits and 2.5 million favorites. 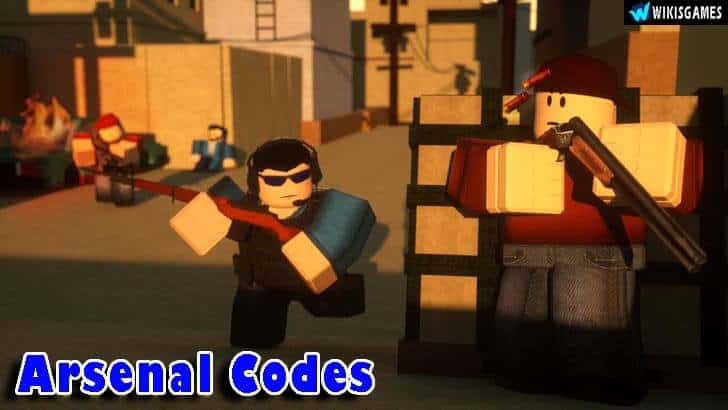 Roblox Arsenal Codes provide players with a quick and easy way to obtain free items. The majority of codes will reward you with cosmetic goodies such as new skins or announcer voice packs. Sometimes, there will be a code that will grant you free BattleBucks, Arsenal’s main currency.

Below are the valid and active codes that you can use to redeem.

How To Redeem Codes in Arsenal?

Follow our guide step by step to redeem Codes in Arsenal.

How Can You Get More Codes For Arsenal?

It’s easy to get more Roblox Arsenal Codes if you are here. We will show you many ways to find the latest codes in the game as quickly as possible. The first way, you can follow the game developer (ROLVe) on their official Twitter. The second way, you can join the Discord Servers. The third way, you can visit the Roblox’s website. But check back our page is the best way to get the code as quickly as possible once they are released. We always update more codes. So, make sure you bookmark this page to get more codes for the game.

How To Play Arsenal?

Unless the game option is Gun Rotation or Randomizer, every time a player kills another player or receives an aid, their gun is changed for a new one in Arsenal. Players must get kills or assists every round until they reach 32 kills. The Golden Gun is used for the 31st kill, while the Golden Knife is used for the 32nd and final kill.

The game is based on the fight against the opponent team/players and contains six game modes:

Players in the standard game mode receive a new gun with each kill until they reach the golden knife obtained after 32 kills. Victory is guaranteed if you kill someone with the golden knife.

The competitive game mode is the same as the standard, except that to win, you must make the last kill with the golden gun, which can win after 31 kills.

Gun rotation is a fun game mode as well. Every round, this mode rotates weaponry, with each player getting the same guns every 20 seconds. To win, players must first get 32 kills with the guns provided, followed by a golden knife kill.

Railgun Royale is a game where you only have one weapon: a railgun. To win, players must get 17 kills, with 16 being railgun kills and one being a golden gun kill.

Concussion mania needs 17 kills, all of which must be acquired with the concussion rifle, thus the name.

Finally, Randomizer is the final game mode. Each player starts with a new gun in this mode. A player will respawn with a new weapon each time they die. The game is timed for two minutes, and the player who has the most kills at the end of that period wins.

These modes are available in two-player, four-player, and free-for-all variants (FFA). At the end of each round, the players decide on the details.

Other methods can be used to obtain bespoke skins. In Arsenal, you can earn free skins by accomplishing various in-game chores, challenges, and objectives. Here are a few skins that are available for free:

Start with a Boulevard map to unlock the Froggy skin in Arsenal. Take a trip to the stinky gas station and find the dumpster for a small frog.

Next, you must kill players close to the frog to grow and wander around. Follow the frog to the apartment when he grows large enough to move. A boarded-up door will be the frog’s destination. Froggy will knock you out and teleport you elsewhere if you shoot the boards and the note of the door.

Choose and install any map, team mode, or game type. After selecting a team, you will be sent to the Apartment map. When you turn around, you will notice a sign that reads:

“Lizzy Says: Save the adorable green frogs! The nefarious ducks have joined forces with the terrifying teddies to assault the frogs! Keep an eye out for their boss, the obnoxious and nasty midi; she might pop up around these parts!”

In carnivals, you have to score 1,000 points by shooting at anything except the frogs. Getting rid of the frogs lowers your overall score. In Arsenal, you can unlock the Froggy skin after earning 1,000 points.

What Does VIP Do In Arsenal?

The VIP game pass costs 395 Robux and may be purchased in Arsenal. It produces the following:

VIP is the name of the VIP unique kill effect. When you kill, massive quantities of Robux are dropped. Instead, it will occasionally drop a significant amount of TIX. A distinctive yellow rareness is present in king and queen, while the VIP kill effect is admin.

The Superball was inspired by Brickbattle, a popular and classic ROBLOX game, and originally appeared in Crossroads. It’s a shotgun that damages 60 of its hits. It is a super-fast-throwing ball that is affected by gravity.